8 Tips to Improve Health by Standing 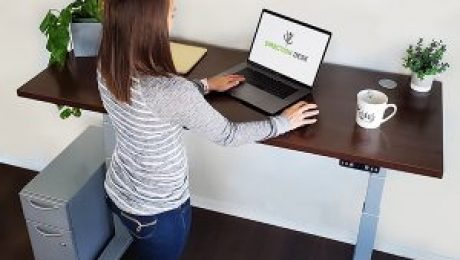 Too much time sitting down may spell bad news for your health. Here are 8 ways to get out of your seat.

Chances are you’re reading this article while perched in a chair. And, if you’re like most computer users, you’ve been there for a while.

Consider how much you sit in a day. Driving during your morning commute to an 8-hour-a-day desk job, and then unwinding on the couch in front of the television all evening. What’s more, think about what you’re dependent on. Email, cell phone apps, direct-deposit paychecks, and online shopping? 10 or 20 years ago, these would have required you to get up and run errands.

If so, then you may have “sitting disease,” a catchy phrase for a sedentary lifestyle that might be putting your health at risk.

The Price of Sitting Too Much

A growing body of research shows that long periods of physical inactivity raise your risk of developing heart disease, diabetes, cancer, and obesity.

In January 2010, British experts linked prolonged periods of sitting to a greater likelihood of disease. And that same month, Australian researchers reported that each hour spent watching TV is linked to an 18% increase in the risk of dying from cardiovascular disease. Perhaps because that time is spent sitting down.

“Human beings evolved as a walking entity, exploring the world on our feet,” says James Levine, MD, author of Move a Little, Lose a Lot.

“The strangest thing in the world is that people spend all day scrunched in a chair. It’s a form of physical entrapment,” says Levine, who strolled on a treadmill in his office at a 1-mile-per-hour pace while being interviewed for this article.

Get Up and Go

Here are 8 ways to help you sneak in some on-your-feet time in an otherwise desk-bound day.

NEAT stands for non-exercise activity thermogenesis, and includes stretching, turning, and bending. Levine recommends that you aim for 10 minutes of NEAT each hour “‘I can’t afford the gym’ is no longer a barrier,” Levine says.

Exercise physiologist Fabio Comana, an instructor in San Diego State University’s School of Exercise and Nutritional Sciences, agrees with this approach to activity. “Get moving more often with small goals,” he says. “Stretch out your entire body, all the muscles that are cramped. If you do it five or six times a day, you’ll start to notice a difference.”

2. Think beyond a lunchtime workout.

“Getting 1 hour of exercise in the middle of the day is better than not doing anything, but that still leaves 7 hours of sitting during the workday,” says David Dunstan, PhD, who heads the physical activity laboratory in the metabolism and obesity division at Baker IDI Heart and Diabetes Institute in Melbourne, Australia.

“Have a whole-day approach to physical activity,” he says. Comparatively, go for a walk at lunch instead of chatting in the break room, or similarly, use the stairs instead of the elevator.

Have a question for your co-worker down the hall? Don’t shoot him an e-mail; walk to his cubicle and ask him face to face. Surprisingly, some companies have instituted email-free Fridays to get employees out of their chairs more often, Levine says.

Standing uses more muscles and burns more calories than sitting. Likewise, train yourself to stand whenever you talk on the telephone, and pace during staff meetings if your boss will allow it.

Help your company encourage its employees to be more physically active without suggesting that they install treadmills at every workstation, Levine says. Moreover, start having walk-and-talk meetings with your co-workers, and get out of the conference room. Move trash cans out of cubicles to make people walk to throw out garbage. Relocate water-coolers by windows, where people will want to congregate.

6. End your workday with a bang.

Typically, you lose steam as 5 p.m. approaches, Comana says. “But if you take a brisk, 15-minute walk in the afternoon, you’ll be far more productive in your last 2 hours,” he suggests. “If you’re worried that you don’t have time for a walk, you may be surprised that you get your work done more quickly afterward.”

If you take a bus or train to work, you can stand up while riding; or do exercises, like clenching and relaxing your muscles; or you can get off a stop early and walk several blocks. In addition, if mass transit isn’t an option, find a distant parking spot so that you walk for a few minutes before and after work, Dunstan says.

Lastly, pull your dust-covered treadmill out of retirement, place it in front of the television, and allow yourself to watch only when you’re walking. No exercise equipment? March in place, or tidy the room. Of course, just don’t be a couch potato. Furthermore, research shows that the longer you sit watching television, the greater your waist circumference, and the higher your risk of dying from cardiovascular disease, Dunstan says.

Exclusive discounts and tips sent to your inbox